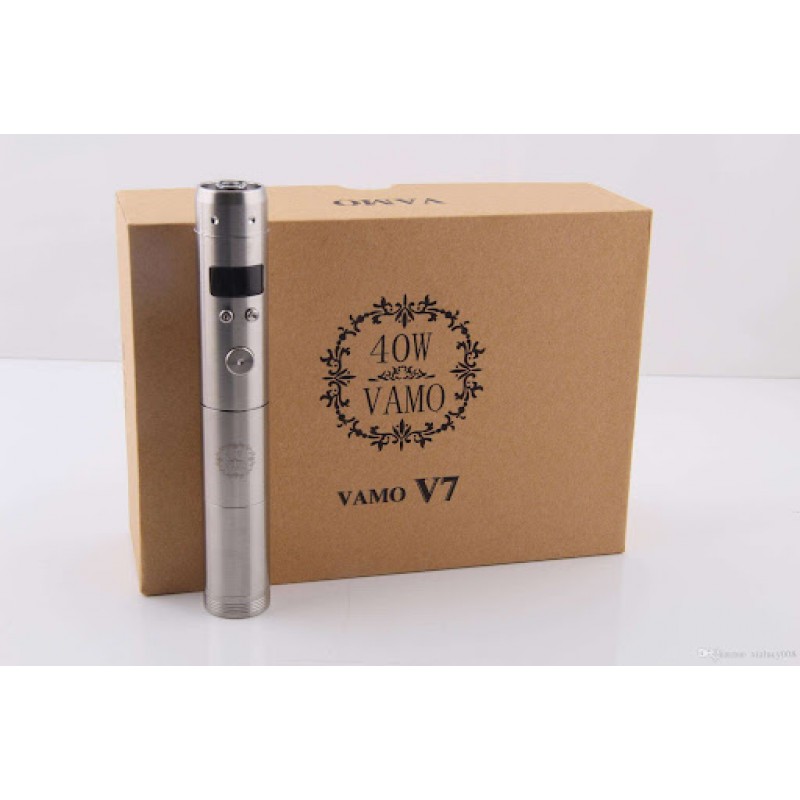 AMO V7 APV MOD UNIT ONLYThe Vamo V7 is another upgrade to the generations of a great cost efficient APV mod units. While it may appear to have the similar characteristics of its previous Vamo versions, it utilizes all of the best combinations of generations into one unit and adds another 20 watts of power. One can say this is the hyrid of all Vamos as it's constructed with the V2 body shape, V3 OLED screen display with upgraded chipset and as well as the V3 top cap design which has the ability to unscrew for a wider range of attachments to use.The first great feature is that the V7, along with it's previous V3/V4 versions, is the RMS mode exclusively active, while maintaining it's common ground variable voltage / wattage mode options. This V7 now features better metal buttons, a different battery spring and a new raised 510 connection. In variable wattage mode, the device can go from 3.0w to 40w in .5w incriments.The Vamo V7 has the ability to measure and display the resistance of your atomizer, cartomizer, or tank. All the information shown via an OLED screen. The device takes a single 18650 size battery or it can also be used in its smaller setting with a 18350 as well by removing the bottom section tube. Also of course two 18350's is always an option with this high tech vaporizer mod.Includes:Vamo V2 Body with new V3 PCB chipset upgrade using OLED screen, top cap unscrew ability.Vamo instructions:1: Output Voltage from 3.0V to 6.0V, the working wattage/voltage +- 0.5W by pressing + and - buttons.2: Keep pressing the + button more than 3 sec, OLED screen displays the present working resistance.3: Keep pressing the - button more than 3 sec, the OLED screen showing the battery volt.4: 5X click, OLED screen displays " on " or " off ".5: Output power 3W~40W.6: Max Armature Current 10A.7: on/off Mode allows you to shut the unit off completely.8: Reverse battery protection keeps circuit safe if the battery is installed backward.9: Battery Monitoring shuts the unit off once battery has reached end of charge.10: Amperage limiting system protects against over current situations.11: Thermal Monitoring shuts the device off if it detects a high temperature condition.12: Fit atomizers with resistance .5~5.0ohm.13: Time limit protection function, it will shut down with more than 10s each puff.14: OLED screen displays " LO-Ω" if resistance lower than .6ohm, "LO-V" if short circuit or low battery.